In 2005 I moved to Valencia in Spain and taught ESL for 5 years in a private language academy. My two children were born in sunny Valencia and I can confirm that the Spanish absolutely adore children. People will give up their seat on the bus for young children. Children of all ages are welcomed and will be handed a slice of Jamon Serrano at every visit to the Mercadona. Sometimes it can be annoying though, like the time a Spanish grandma kept on insisting we should put socks on our baby’s feet even though it was summer and 35 degrees! So when my Year 7 Spanish student wrote the following quote I completely understood. 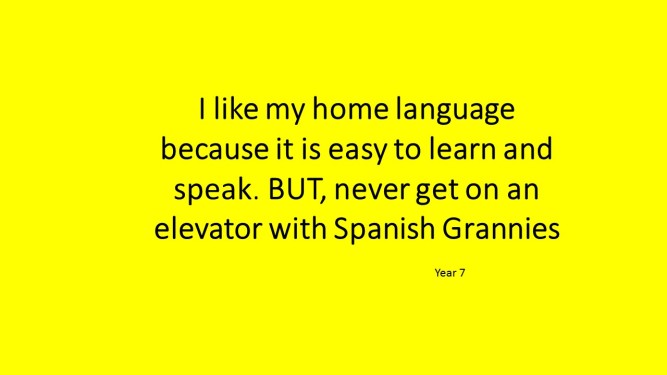 Pablo explained: “it is really annoying when that happens because those grannies will start talking to each other about how much you have grown and how big your cheeks used to be. It is very difficult to avoid being pinched in the cheeks in an elevator”

One reason I picked up Spanish so quickly is the fact that Spanish people are very sociable and always willing to chat: on the bus, in queues and in elevators. In 2011 we returned to my home country, Belgium, after taking a 15 month travel detour around Western Australia and South-East Asia and I took up a post as an EAL teacher at The British School of Brussels. The Belgians are perhaps not so sociable and being in an elevator in Flanders, the Dutch speaking part of Belgium, is a completely different experience. The following clip illustrates this perfectly:

I challenge you all, next time you are in Belgium ……….. Did you say something?